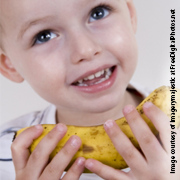 Complementary and alternative treatments such as the gluten and casein-free diet (GFCF), while not recommended in national and international guidelines on autism intervention, are extremely popular among families of children with autism spectrum disorders (ASDs), with a reported use between 52% and 95%. Casein is a protein found in dairy products, and gluten is a protein found in wheat, rye, and some other grain products; therefore, individuals on a GFCF diet cannot eat common foods such as bread, milk, cheese, or ice cream, and the GFCF diet involves challenges such as increased preparation time, increased food-related expenses, and children refusing to eat the dietary selections.

The GFCF diet has been promoted as a treatment for the core symptoms of autism as well as the gastrointestinal (GI) symptoms that might be present in children with ASDs. The rationale (though unproven scientifically) for this treatment is that GI and behavioural symptoms of autism originate from an impaired ability to break down dietary proteins present in gluten and casein, which results in the formation of chemicals that cross the intestinal membranes, enter the bloodstream, and damage the brain.

This hypothesis was recently tested in a number of rigorous studies, all failing to show that children with ASDs have “leaky guts”.

While anecdotal reports of improvement in ASD symptoms with the GFCF diet are common, controlled studies have been limited. Based on preliminary findings, available research data do not support the use of GFCF diet as an effective treatment for individuals with ASDs. No research study, so far, addressed the crucial issue of potential harm of GFCF diets. However, researchers agree that dietary intervention might alleviate gastrointestinal distress in a subgroup of children with ASDs who are affected by GI problems. Currently, we don’t know how many children with ASDs show concurrent GI symptoms. While the existence of a gastrointestinal disturbance specific to persons with ASDs (e.g., “autistic enterocolitis”) has not been established, many children with ASDs, just like children without ASD, might suffer from gastrointestinal symptoms. Since children with autism are impaired in their ability to communicate their discomfort, pain associated to GI symptoms might increase the likelihood that serious problem behaviours such as aggressiveness or self-injurious behaviour might occur. Therefore, addressing the GI symptoms might result in significant behavioural changes (e.g., reducing challenging behaviours).

In conclusion, there is not enough evidence to support special “autism diets” that eliminate casein and gluten, and additional data are needed before paediatricians and other professionals can recommend specific dietary modifications. Three large scale controlled studies are currently underway (NCT00090428, NCT01116388, and NCT00614198;).

When children with ASDs present with GI symptoms, a thorough evaluation should be conducted (as would be undertaken for individuals without ASDs who have the same symptoms). This subgroup of children might benefit from appropriate dietary intervention. However, given the real hardships associated with implementation of a strict GFCF diet, additional studies are needed to assess risk factors and possible markers that identify individuals who might benefit from these diets. Families must consider the implications of further dietary restriction in a child who may already have a limited food repertoire. Because bone loss has been reported in children on the GFCF diet, consultation with a registered dietician is recommended before foods are eliminated from the child’s diet. Proper nutrition is as important for people with ASDs as it is for anyone else.

There is a Cochrane Review (by Millward C, Ferriter M, Calver SJ, Connell-Jones GG. Published Online: January 21, 2009), which looked at all the published studies to date, that has good scientific merit.

When you get to this review, you will also find reviews of vitamin B6 /magnesium, omega-three essential fatty acids and a number of other treatments such as acupuncture, music therapy and some reviews looking at drugs and whether or not they work.

In practice I give parents the information that we have no evidence that a gluten and casein free diet helps, but I would support them if they really wished to try the diet. I try to get them to have some specific advice from a dietician and recommend a limited time period (usually 6 months) for the diet to run.