My daughter has just turned 8 and is severely affected by classic autism. She is non-verbal. Recently she had a fever and her behaviour changed dramatically. She wanted to be held, maintained eye contact for lengthy periods and most incredibly – spoke words very clearly! She said her brother’s name and repeatedly said “Mum”. I have to repeat how incredible this is as she is completely non-verbal. Please somebody research this phenomenon! 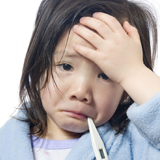 The behaviour change that you observed in your daughter is known to autism researchers. It has been investigated in a few studies, two of which are described in the links below. But we still don’t know how common this behaviour change during fever is in children with autism. We also don’t know the reason why it occurs, even though there has been some discussion in the scientific literature about it.

One of the studies on this topic was completed in the US and confirms your observations, albeit with a relatively small group of children. The study was published in the medical journal, Pediatrics, in 2007. Below is a summary of the study, published on the website of Autism Speaks.  (See also the link at the end of this document).

Here is the original article.

In 2009 another study was published in the scientific journal Brain Research Reviews that was summarised on the website of the Autism Support Network in the US.

And here is the link to the complete paper.

The authors suggest an explanation that autistic behaviours may be an outcome of malfunction in the LC-NA system of the brain stem, which improves during fever episodes. We wish to emphasize that this is only a theory at this stage and that further research needs to be undertaken before this theory can be verified.

There is general agreement amongst researchers and practitioners that in the majority of cases, we do not know what causes autism and how it can be prevented. It is widely understood that there are many causes of autism and therefore there need to multiple treatments. We do know however that behaviourally based early intervention can significantly improve symptoms and behaviour.

The theory proposed in the above paper is one of many and should not be taken as the simple truth.

Also see an article in the US journal Time, which also emphasises the points just made.