Are you passionate about working with children with autism?

We want to better understand different factors that can influence the well being of people delivering early intervention to children with autism.

Anyone over the age of 18 currently delivering early intervention to children with autism (aged 6 years or under) is invited to participate.

Participation in this study involves completing an online questionnaire about your experiences as an early intervention therapist, which should take approximately 30 minutes to complete.  All responses to the questionnaire are anonymous and all information collected is completely confidential.

As a thank-you for participating in the study, you will have the opportunity to go into a draw to win one of four $50 Coles/Myer giftcards after you complete your questionnaire.

How can I participate?

If you wish to participate in this study or find out more information, simply follow this link to redcap, which will take you to a page where you can find out more:

If you have any questions, please email Dr Kristelle Hudry, k.hudry@latrobe.edu.au

OTARC has had many achievements over the last decade, including the:

Although significant, 10 years of achievement pales in comparison to a lifetime of achievement, and we were thrilled that our inaugural Chair, Professor Margot Prior was awarded the International Society for Autism Research (INSAR) Lifetime Achievement Award at its annual conference, held in Rotterdam in May. I was privileged to give the Acceptance Keynote on Margot’s behalf, presented by the INSAR President, Professor Simon Baron Cohen. Simon thanked me for introducing Margot to a new cohort of INSAR scholars and, indeed, I had many approach me to comment on her remarkable achievements. Australia is lucky to have her! 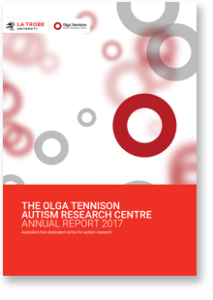 Living with Autism Podcasts: Vaccines do not Cause Autism…

There’s a large issue surrounding the relationship between vaccinations and autism. The theory that vaccinations cause autism in young children continues to generate interest in the media and the general public, and may have contributed to the rise of many anti-vaccine campaigns.

END_OF_DOCUMENT_TOKEN_TO_BE_REPLACED

Living with Autism Podcasts: Prevention as Intervention with Dr…

Many parents are told by health professionals that their child will ‘grow out’ of what research has shown are early signs of autism. Olga Tennison’s Autism Research Centre’s Dr Kristelle Hudry says this ‘wait and see’ approach misses a vital opportunity for maximising a child’s developmental outcomes by starting very early intervention. END_OF_DOCUMENT_TOKEN_TO_BE_REPLACED

Living with Autism Podcasts: Early Intervention in Childcare with…

END_OF_DOCUMENT_TOKEN_TO_BE_REPLACED

The Frame of Mind Exhibition

Frame of Mind was an annual art exhibition and autism awareness campaign that invited the viewer to engage with art in a meaningful and rich experience.

END_OF_DOCUMENT_TOKEN_TO_BE_REPLACED

Is there a genetic cause for autism?

A variety of genetic factors are likely to be the ultimate cause of most cases of autism. These may work by themselves, or in combination with environmental factors, to lead a child’s brain to develop differently and result in autistic behaviours.

To examine the influences of nature (genetics) and nurture (environment) on a given human quality, scientists study twins.

Twin studies start by defining a clear population, say the metropolitan area of a city, and finding as many sets of twins as possible in that area where one or both of the twins have the given trait of interest – in this case, autism.

Scientists then look at the “concordance” of that trait – that is, the percentage chance that if one twin has autism, the other twin will also have autism. If the concordance is higher for identical twins than fraternal twins, then we can say the difference is due to the increased amount of genetic material shared by the identical twins, and that autism is influenced by genetics.

The first twin study of autism was conducted in 1977 on 11 identical and ten fraternal twins across Great Britain, where at least one of the twins had autism. Concordance for identical twins was 36%, compared to 0% for the fraternal twins.

While the study was only small in size, it provided the first evidence that autism may be genetic in origin. Since this pioneering study, more than a dozen further twin studies have confirmed this original observation.

The best current estimate is that there is a 50-80% concordance for identical twins and a 5-20% concordance for fraternal twins. This indicates a strong genetic component to the condition. The figure for fraternal twins – 5-20% – also represents the chance of a couple who already have a child with autism having a second child with autism (referred to as the “recurrence risk”).

Once scientists have established that the cause of a disorder is influenced by genes, the next task is to identify the exact genes that might be involved. However, after several decades of intensive research, scientists could find no one genetic mutation that all individuals diagnosed with autism shared.

It was these findings (or lack of findings) that led scientists to stop thinking of autism as one condition with one cause. They started viewing it as many different conditions which all have relatively similar behavioural symptoms.

This new view of autism has proved extremely fruitful in discovering subtypes of autism. For example, a number of conditions have very clear genetic or chromosomal abnormalities that can lead to autistic behaviours.

These include disorders that have abnormalities of the chromosomes, such as Down syndrome. While no chromosomal condition itself accounts for any more than 1% of individuals with autism, when combined they account for approximately 10-15% of all individuals diagnosed with autism.

The exact genetic abnormalities that may lead to the remaining cases of autism are not completely clear. There are two reasons for this.

The first is that the genetic regions involved are likely to be very complex. Scientists have needed to develop new techniques to examine them.

The second is that it is probable the genetic mutations are very rare and complex. The DNA chain that forms our chromosomes contains more than 3 billion building blocks. To identify small pieces of DNA that may be linked to the development of autism among so many base pairs, scientists need to study a very large number of people with autism.

To date, no study has been able to examine the thousands of people necessary to identify with accuracy all of the small mutations that might lead to autism.

However, with genetic technologies improving at an astronomical pace, as well as global scientific cooperation that will lead to large numbers of people being studied, major advances in the understanding of the causes of autism are likely in the very near future.

A likely prospect is that many cases of autism will be related to what is called “common genetic variation”. This refers to differences in genes that are also found in many individuals who do not have autism and which by themselves are not sufficient to lead to autism. However, when multiple genetic risk factors are found in the same person, they combine to have a major effect on how the brain develops.

A small proportion of autism cases are also likely to be caused by what are known as de novo (“new”) mutations. Most often, the egg and sperm that create a baby contain genetic material that is present in the mother and father, respectively. However, in rare cases, the egg and sperm may contain genetic material that is not found in either parent. There is now good evidence that some people with autism may have inherited de novo genetic mutations that have an effect on brain development.

This is an excerpt of an article originally published on The Conversation. Read the original article.

Does the brain develop differently in those with autism?

For a considerable time scientists were searching for one clear brain difference that may be lead to autistic behaviours. However, this hope has yet to be fulfilled, with few studies identifying brain characteristics that are shared by different individuals diagnosed with autism.

This may be a further indication that autism has many different causes, but it may also be a reflection of the difficulties in studying the brain.

Currently, scientists use a variety of clever techniques to understand the structure and function of the brain, such as magnetic fields, X-rays and radioactive chemicals. As ingenious as these methods are, they are unable to provide a full measure of the tremendous complexity of how the brain operates.It is also unlikely that autism affects just one area of the brain alone. The complex behaviours of individuals with autism, which include cognitive, language and sensory difficulties, make it difficult to pinpoint just one brain region that may be affected. Nevertheless, some promising leads have shown how different brain pathways may lead to autistic behaviours.

Another research technique has been to dissect the brains of individuals with autism who have prematurely died, so-called post-mortem studies. A recent study that examined the brains of 11 autistic individuals at the microscopic level found changes in the structure and organisation of the brain cells that form during fetal life, indicating differences in brain development that begin very soon after conception.

Another well-studied area in autism is head circumference growth in the first years of life. This research dates back to 1943 and Leo Kanner’s original study that found five of the 11 children with autism he examined had large heads.

Several small studies throughout the 1990s and 2000s searched the medical records of relatively small groups of children with autism. These found that a key period was the first two years of life, in which a minority of children later diagnosed with autism had a marked increase in the rate of growth of their head.

During the first two years of life, the size of an infant’s head is a reasonable indicator of total brain size, and for many years “brain overgrowth” during very early development was seen as a risk factor for a later diagnosis of autism.

However, more recently, this view has been challenged by the release of the largest ever study in this area, which found no link between infant head circumference growth and autism.

Studies using brain imaging machines have examined whether parts of the brains of individuals with autism may be different in size, shape or function.

However, the only consistent finding is just how much inconsistency there is. Not every individual with autism has differences in the size or pattern of growth of different brain regions. For those individuals who do, it is unclear how this may relate to their autistic behaviours.

If found to be accurate, these brain differences may be able to explain why some individuals with autism have difficulties with complex tasks that require the integration of information from multiple brain regions (such as cognitive and social abilities), but have no difficulties, or even enhanced abilities, for tasks that require less integration across brain areas (such as sensory processing).

This is an excerpt of an article originally published on The Conversation. Read the original article.